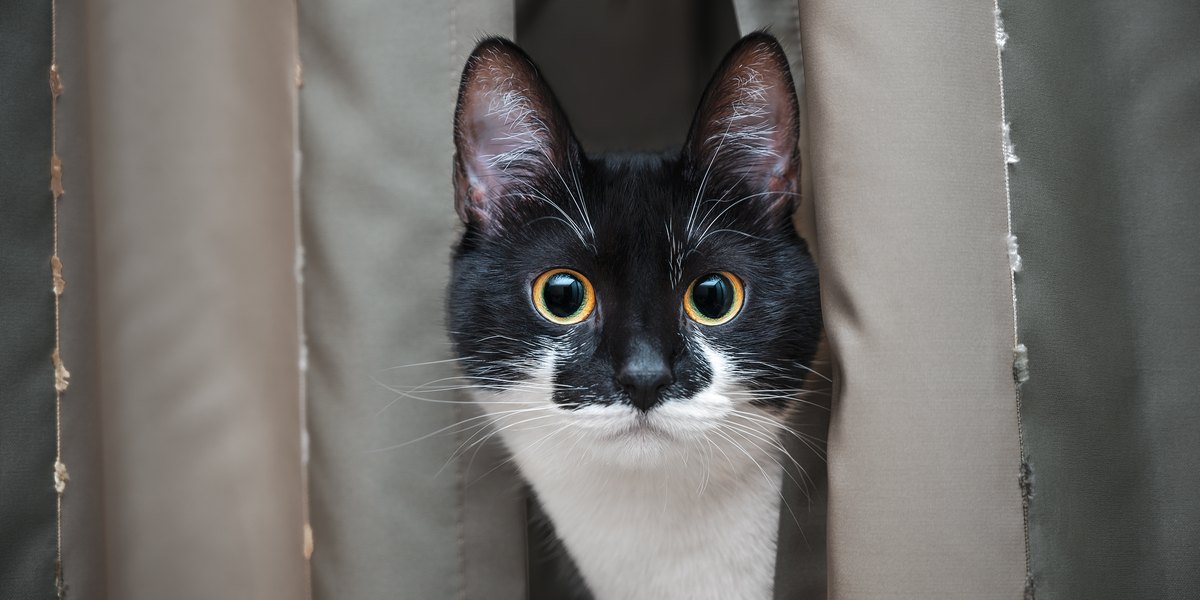 There are a variety of reasons why a cat may be staring at you including trying to communicate with you, out of curiosity, expressing emotion, or waiting for a cue. The majority of the time, a cat’s stare is part of the processing of stimuli around them, as they constantly smell and sees and reacts accordingly. 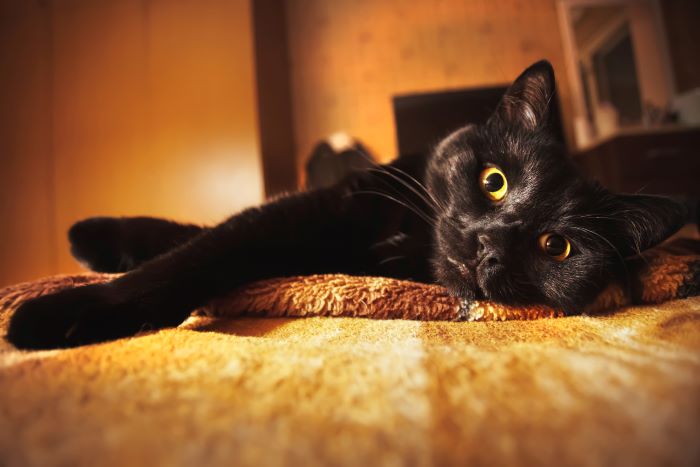 Cats are naturally curious, so they’ll often stare at someone simply because they’re interested in what that person is doing.

Cats are naturally curious and since they are prey and predator animals, they always like to know what it is going on around. It could just be that they are observing you, maybe you just begun to move after sitting and they shift their focus to you due to the motion in the home.

#2 Waiting For A Cue Or Asking For Something 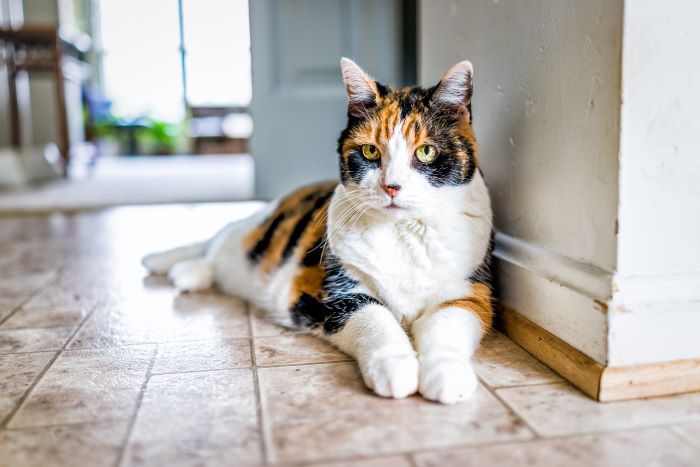 Frequently, cats will stare at you because they believe that this will encourage you to do or give them something.

A cue is a signal that triggers a behavior. Cats are always learning, and we are teaching them even if we do not realize it. For example, when you take out the can opener when your first wake up, your cat comes running in anticipation of food. The cat has formed a positive association over time with the can opener and delicious breakfast, the can opener becomes a cue to come and stare at you.

Another common example is your cat may have stared at you in the past and when they stare at you, you have taken that as them asking to play, be pet, or be fed. They have learned that eye contact (staring) with you results in something they like and will continue to do it to get the same result (play, petting, food).

The more you reward this behavior over time, the more likely the cat will stare at you for what they want.

#3 Communicate With You And Express Emotions 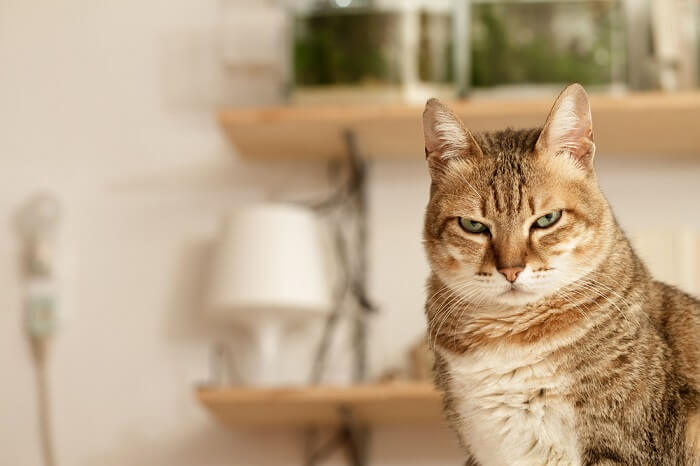 Cats will sometimes stare at you in order to communicate their feelings.

Also Read: What Your Cat’s Tail Can Tell You?

The important thing to remember is to look at the entire body of the cat – not just the eyes – and take note of the current context/situation in which the body language occurs. They use their body to show you when they’re feeling calm and relaxed, and when they’re feeling stressed out and anxious.

A relaxed cat has soft, open body language with natural breathing and a gentle appearance to the face.

A cat who is relaxed will have loose body movements and their breathing will be slow and steady. They may fold their feet in front of themselves or stretched way out in front.

A relaxed cat’s ears and whiskers will be at their neutral positions, or maybe slightly forward. The pupils will be thin slits and eyes would be almond shaped. They may have a half open or soft squinty, eye lightly closed or slow blinking along with a soft, relaxed body.

A slow blink indicates that your cat is feeling safe, happy, and is commonly used to express affection to humans and other cats. 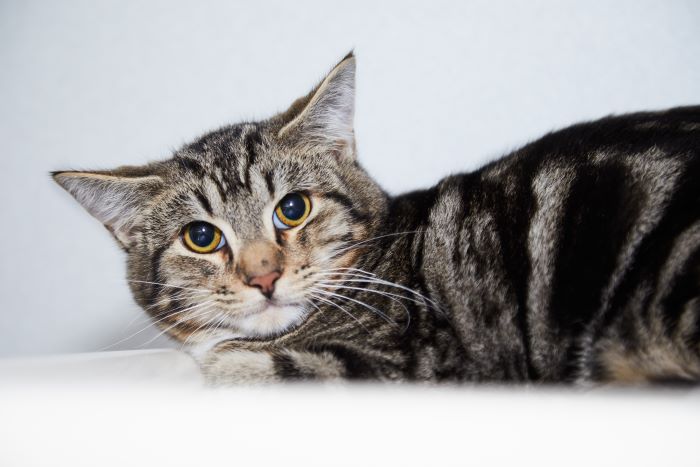 In contrast to a relaxed cat, a cat who is staring fearfully will have a rigid appearance, with very wide eyes and generally tense body language.

A cat who is fearful and/or stressed will most likely freeze in place or run and hide. Their body will be tense and limbs and tail with be close to the body unlike with relaxed body language when limbs and tail are away from the body.

They may hold their legs underneath them in a crouched position. Their ears may be to the side or tucked back along with their tail. Their pupils will be dilated appearing big and round. They may be staring with direct eye contact usually in the direction of what is scaring them.

When your cat is exhibiting this body language, they are stressed and possibly scared and may exhibit aggressive behavior because of this.  It is best to not pick up or touch your cat when they are exhibiting this body language and instead move what they are afraid of away from them (including humans) and toss some delicious treats to them or use the treats to lure them to a more comfortable place.

The best way to interpret your cat’s staring is to consider what nearby stimuli (including things humans might not be able to hear or see) could be a source of your cat’s attention, as well as to assess your cat’s body language for other clues to discover what they are trying to communicate.

Why does my cat stare at me creepy?

Cats rarely blink normally, so their gaze may look unusually intense. A nervous or intent cat will not move while watching an object, and this stiff, alert body language combined with a lack of blinking can look creepy.

Should I stare back at my cat?

Generally, no. You can look back at your cat with a soft gaze, but directly staring into your cat's eyes could be perceived as aggressive and may make your cat uncomfortable.

Why you should never look into cats eyes?

It's not true that you should never look into a cat's eyes, but directly staring into your cat's eyes may appear aggressive to your cat. Softly or indirectly gazing at your cat, however, could signal comfort and trust.

Why do cats watch you?

Cats may watch you for a variety of reasons. Cats tend to be very cautious and aware of potential threats, so a wary cat may keep their eyes on something to avoid being surprised by any sudden movements. Your cat may also watch you out of curiosity. Pay attention to your cat's body language to determine whether they are feeling comfortable or nervous.

Why does my cat keep staring at me?

There are a variety of reasons why a cat may be staring at you including trying to communicate with you, out of curiosity, expressing emotion, or waiting for a cue.

11 thoughts on “Why Is My Cat Staring At Me? Top 5 Reasons Explained”