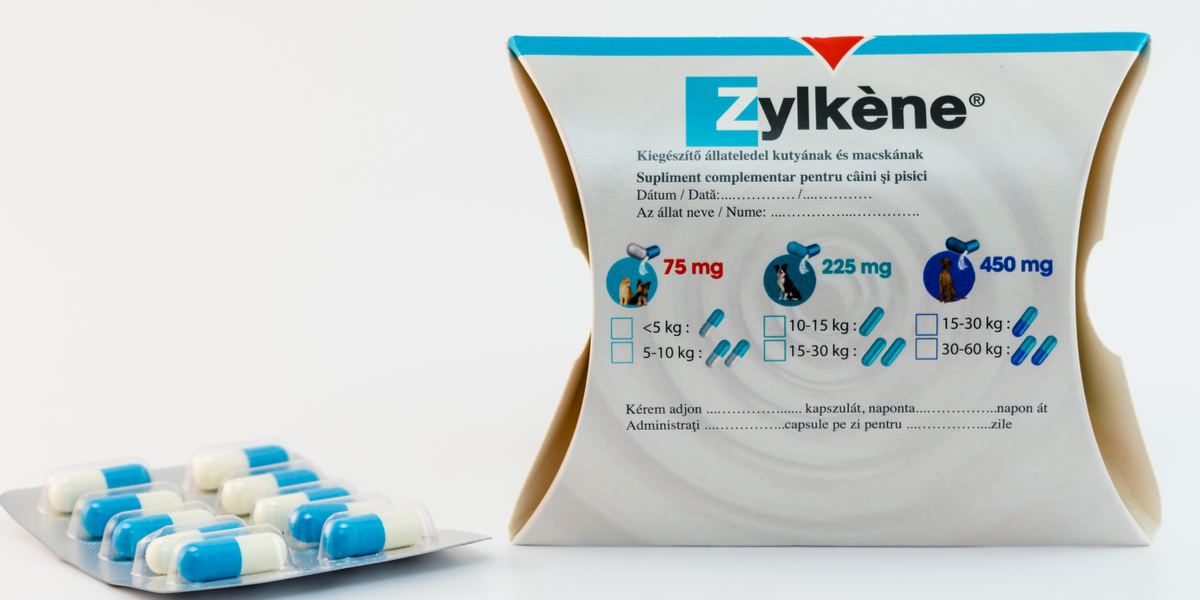 Zylkene is a brand name for a calming supplement product containing hydrolyzed milk protein, or casein, manufactured by Vetoquinol. In this article, you’ll learn what Zylkene is, how it works, situations where it may be recommended or used, potential side effects, and some frequently asked questions.

About Zylkene For Cats

Zylkene is the brand name for a specific calming supplement. Its active ingredient is a hydrolyzed milk protein called alpha-casozepine or casein, which is derived from cow’s milk.

A hydrolyzed protein is one that has been broken down synthetically into its smaller amino acid and peptide components. Hydrolyzed protein is generally considered hypoallergenic because these protein components are too small to cause the body to develop an immune response, making them a hallmark of many hypoallergenic veterinary prescription diets.

In the case of Zylkene, the benefit of the protein being broken down into smaller components is that the bioactive peptides that help produce the calming effect are far more bioavailable to the body to utilize in a pre-broken down form, if you will, than the whole protein component would be.

Zylkene is generally used for both short-term and long-term relief of stress and anxiety in pets, and there is a fair amount of clinical research available to support its use.

As a nutraceutical, Zylkene is not considered a true drug or medication and thus carries no label for treating any behavioral condition. However, through research and clinical experience, it has been found to be beneficial to help support and maintain a state of calm and relaxation, and may be used alongside prescription medications to help with certain stress or anxiety behaviors in cats.

What Does Zylkene Do For Cats?

The principle behind alpha-casozepine is that it helps to generate a non-drowsy calming effect that may be helpful for cats experiencing stressful situations. This is often compared to the known state of relaxation that it produces in nursing human infants, promoting a sense of comfort and contentment.

This is achieved through the activity of broken-down components of the whole protein called bioactive peptides, which are made more bioavailable to the body through the hydrolyzation process.

According to a 2020 article “Cats at the Vet: The Effect of Alpha-s1 Casozepin,” which was published in the journal Animals, these bioactive peptides display an affinity for the gamma aminobutyric acid (GABA) receptors in the brain.

When stimulated, GABA can help to boost mood and have a calming, relaxing effect on the nervous system.

The benefits of alpha-casozepine have been shown a few times over the years in various clinical trials and research.

In 2007, a research paper published in the Journal of Veterinary Behavior, found that over a nearly 60-day trial involving 30 cats, Zylkene showed a statistically significant positive effect on anxious disorders and social phobias in cats when compared to a placebo.

This included several types of anxiety/fear disorders including (but not limited to) fear of strangers, fear-related aggression, general fear, and interactions with housemates.

The “Cats at the Vet” article looked more specifically, as the title suggests, at taking kitties to the veterinarian, which can be pretty stressful for many of our feline patients.

That study found that cats treated with Zylkene at least three to six days prior had a significant absence of sweaty paws, a sign of anxiety in cats. Fecal cortisol (the body stress hormone) levels were also found to be modestly reduced.

Generally in practice and in the author’s personal experience in working with veterinary behaviorists, Zylkene can typically be used alone to help cats through short periods of stress, such as with new visitors, or for cats with milder forms of anxiety.

In cases where a cat has severe anxiety, Zylkene alone may help some, but may not be sufficient to relieve all of a cat’s signs of stress. In these cases, using it alongside a medication prescribed by a veterinarian may yield better results.

Side Effects Of Zylkene For Cats 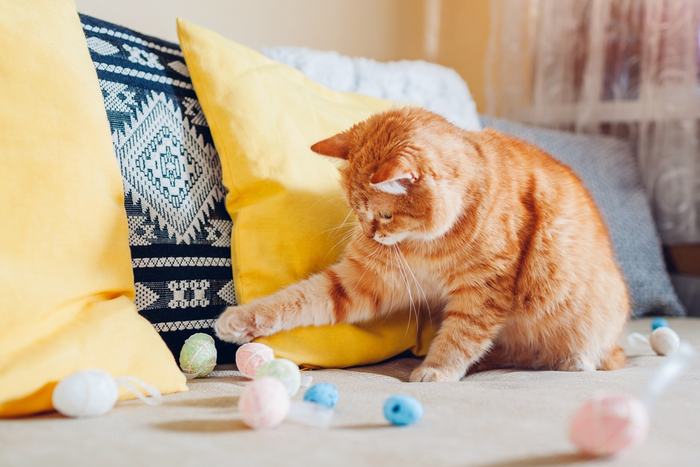 One of the few side effects of Zylkene is a calming effect, which may lead to decreased activity.

Fortunately, adverse effects to Zylkene are considered very uncommon. A calming effect may manifest in some cats as decreased activity, though as mentioned, Zylkene generally has this effect without causing drowsiness.

The 2007 research article from the Journal of Veterinary Behavior found that Zylkene had a very high margin of safety with no signs of side effects over the nearly two month period of time the study was conducted.

Generally in practice, the Zylkene product has a good reputation among practitioners for having a very low risk of adverse effects and for “playing well” with other medications. Zylkene is used often by veterinary behavior specialists alongside many common behavioral modification medications.

Although Zylkene is over the counter and does not require a prescription, it is always best to discuss the use of Zylkene with your veterinarian or veterinary behavior specialist before starting it. 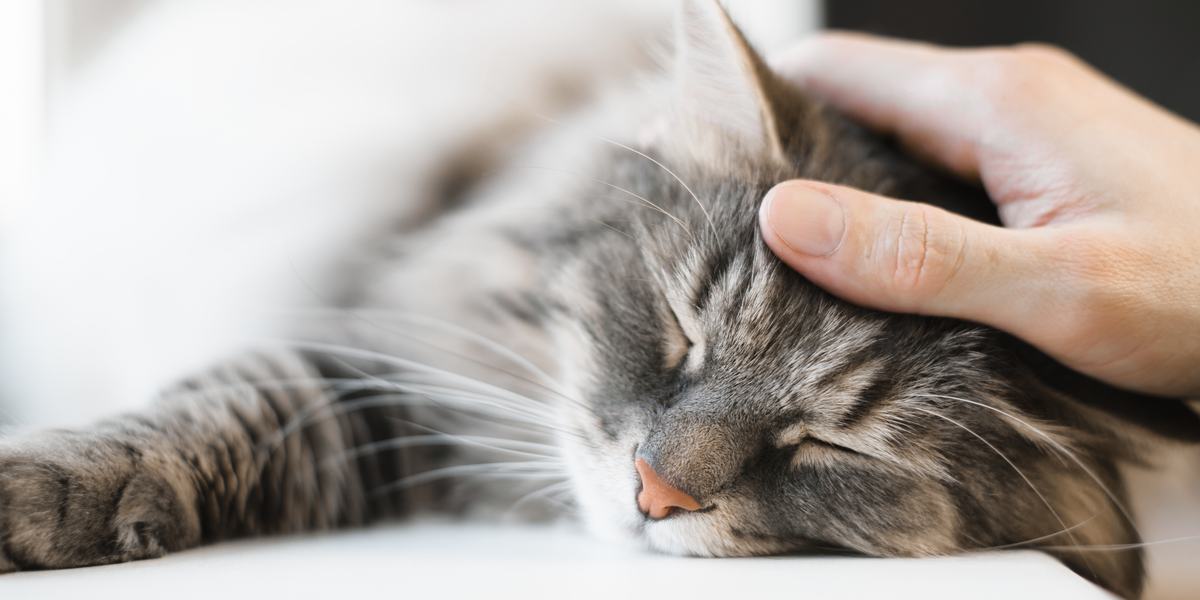 Zylkene capsules may be given whole or opened and sprinkled over the cat’s food.

Zylkene comes in a powder form, inside a small capsule. The Zylkene capsule is typically opened and sprinkled on canned or soft food, or could be mixed with tuna can juice or something similarly tasty. The capsule can also be given whole, without being opened. If giving it this way to a kitty, it is usually best to follow a capsule with a small amount (1 to 2 milliliters) of water.

Zylkene comes in several dosage sizes, but the 75 milligram size is typically used for cats. According to the manufacturer, for cats 10 pounds and under, one capsule is given per day. For cats over 11 pounds, two capsules may be given per day.

It is possible that your veterinarian or veterinary behaviorist may recommend a higher dose in some cases based on their own experience using Zylkene. The higher dosage capsules intended for dogs contain the same ingredients. In studies, higher doses of Zylkene were used, to no ill effect, and sometimes to a more noticeable improvement in behavior.

All the same, never assume that “more is always better,” even with a supplement. Always consult with your vet first before making any dosage adjustments.

According to the manufacturer, Zylkene is recommended for short-term use. For many pets, giving one to two days before a planned stressful event is advised, although for some pets, giving five to seven days ahead of time may work better. There is one study that even found 10 to 14 days to be a more preferable “loading period” prior to a planned event. In the author’s experience, using it at least one week in advance of a planned event (like a vet visit, having a bunch of visitors over, etc.) yields better results.

Although indicated by the manufacturer for short-term use, Zylkene is often used long term as well, by veterinarians and veterinary behavior specialists. There are not known to be any long-term ill effects of use, though there are no specific studies found looking at use beyond two months.

If you find that Zylkene does provide a beneficial calming effect for your kitty and you’d like to consider using it for a longer-term period, always make sure to discuss this with your veterinarian or veterinary behaviorist first.

Zylkene is considered to be a natural behavioral supplement that may be used in cases of mild behavior concerns in cats, or used alongside a medication therapy plan. It is considered to have a wide margin of safety. Although it is a nutraceutical, clinical research in cats has shown several benefits for stressed kitties.

How long does it take for Zylkene to work in cats?

The alpha-casozepine in Zylkene appears to be a substance that requires some time to build up in a patient’s system. According to the manufacturer, it may take anywhere from one day up to seven days for beneficial effects to be seen. Generally, beneficial effects were seen in studies after use for at least three to seven days. Some studies have recommended use for 10 to 14 days before a stressful event.

Does Zylkene work for cats?

According to a couple of studies over the past few years, it certainly appears to. A study from 2007 referenced in the above article found that many signs of fear seen in a group of 30 cats over 60 days were reduced across the board.

Generally, many veterinarians and veterinary behavior specialists utilize Zylkene as part of a multi-modal approach to behavioral therapy in cats.

For expectations, it may work best for milder cases of stress or anxiety, or to help alongside another medication regimen for a behavioral disorder. Cats with severe stress or anxiety disorders are unlikely to show vast improvement on Zylkene alone.

How long can a cat stay on Zylkene?

According to the manufacturer, Zylkene is typically used on a short-term basis, especially as a way of prepping a cat to get through a single stressful event. However, it has been used clinically for longer-term use for generalized behavioral disorders and appears to be safe and well-tolerated.

Although this appears to be the case, it’s very important to discuss with your veterinarian or veterinary behaviorist before considering Zylkene for any long-term use.

What are the side effects of Zylkene?

Fortunately, Zylkene appears to have a very low risk of side effects. The manufacturer does not list any, though as a nutraceutical and not a drug/medication, they are not required to do any clinical trials before a product is released.

However, in the 2007 research study mentioned above, no side effects were noted during the approximately 60-day period that the product was used in about 30 cats.

6 thoughts on “Zylkene For Cats: Overview, Dosage & Side Effects”