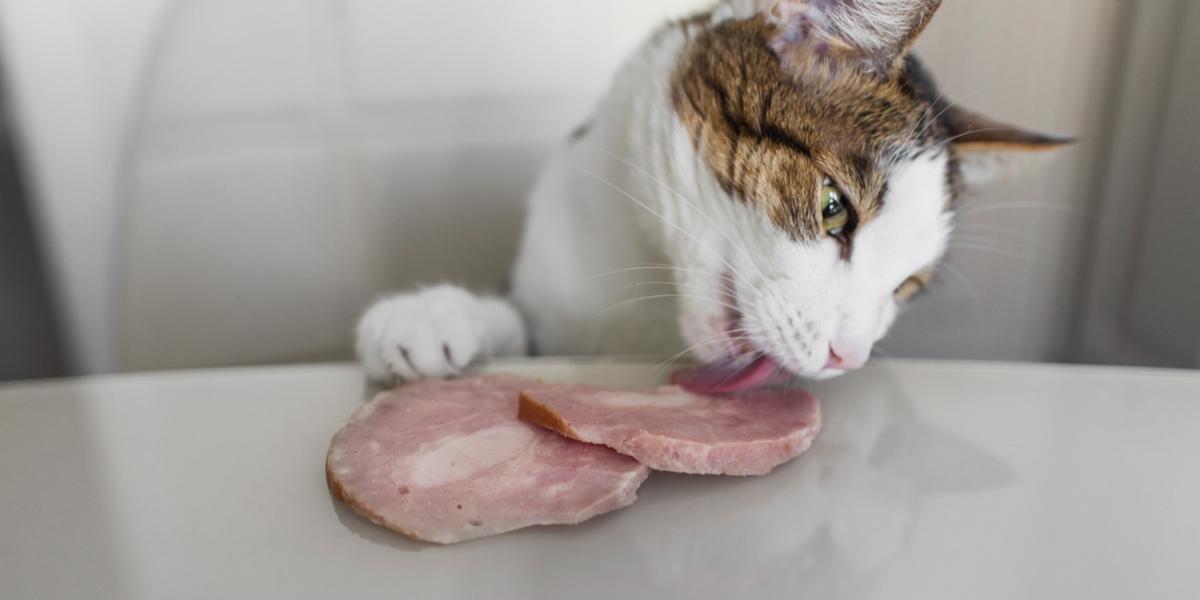 When you’re looking for a tasty and nutritious treat for your feline friend, you might think ham could be a good option. After all, ham is a deli meat that is full of protein, and your kitty needs protein to keep their muscles and other tissues healthy.

But can cats eat ham? Is it safe, and are there any risks? Well, the answer is yes, cats can eat ham. However, there are some risks that you should be aware of before you offer ham to your furry family member.

Cats are obligate carnivores, which means that they need animal protein as the primary component of their diet. Although ham is a source of animal protein, leaner options like chicken, turkey, or fish are healthier options for your four-legged friend. So, if your cat does enjoy ham as a treat, make sure you’re not giving it too often. 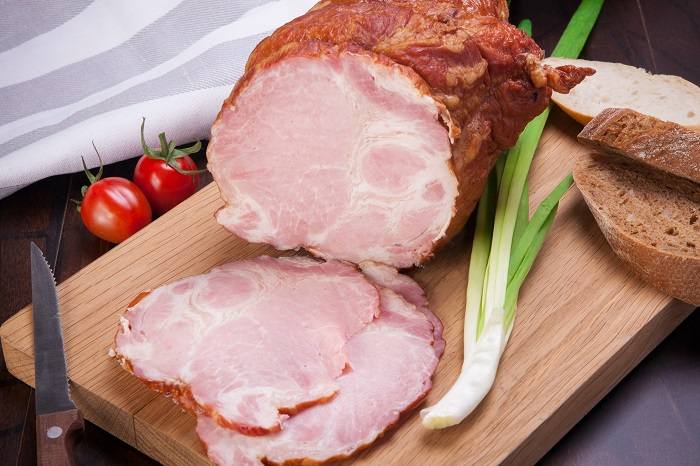 Ham comes from a pork leg joint, and the meat is usually preserved using salt or by smoking. The approximate nutritional composition of one thin ham slice (18 grams) is shown in the table below.

It’s important to remember that there are different types of ham, and the nutritional values will vary between them. For example, honey ham will have a higher sugar content than plain cooked ham, and turkey ham will have a lower fat content because it is leaner meat. 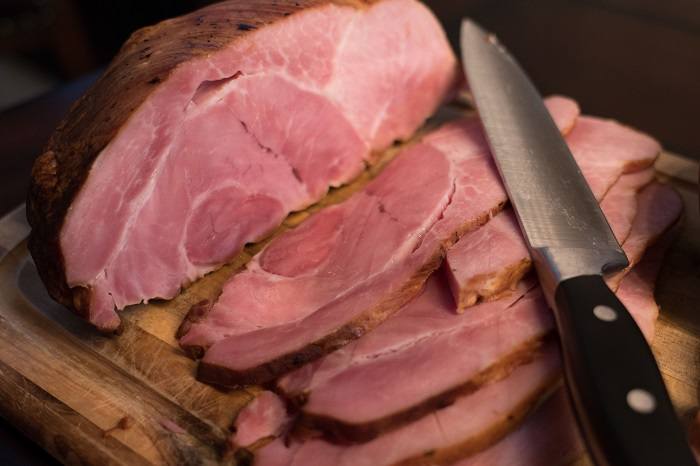 As you might have gathered from the information above, ham tends to be high in salt and high in fat, and neither of these qualities is ideal for your furry friend. It’s also completely deficient in fiber, which, although not essential, is helpful to keep the gut healthy.

On the other hand, ham does contain high protein levels, which is crucial for the growth and repair of all of your cat’s body tissues. It also has many essential vitamins, including the B vitamins and selenium, and minerals like iron and zinc.

Is Ham Good For Cats? 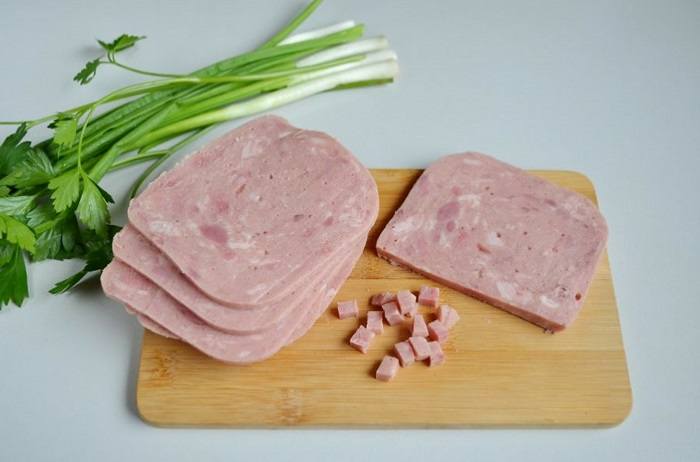 Although deli ham is nontoxic and contains beneficial protein and various vitamins and minerals, it’s not the best option when it comes to feeding your cat. Any nutritional benefits are likely to be outweighed by the high salt levels and fat content.

If you’re looking to treat your kitty to a tasty snack, it’s best to avoid ham made from pork and consider turkey ham or even plain chicken, as these meats contain less fat.

And remember, the best food for your feline friend is their nutritionally complete, commercial cat food. After all, it contains the perfect balance of ingredients to keep them in tip-top health. If you give too many extra treats and tidbits, it could upset the balance of their diet and cause health issues. 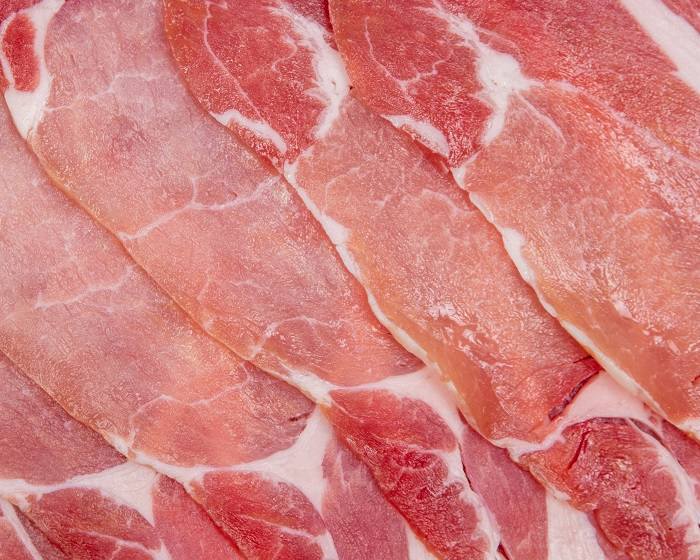 Many cats enjoy ham, and although it shouldn’t be given too often and only in small amounts, it does serve one particular purpose, and that’s giving medication.

If your cat is a suspicious character, they might find tablets hidden in their food, and if they’re a little bit feisty, giving them the tablet directly might not be an option. Ham can sometimes be the perfect bribe or disguise to get your kitty to cooperate.

How Much Ham Can A Cat Eat? 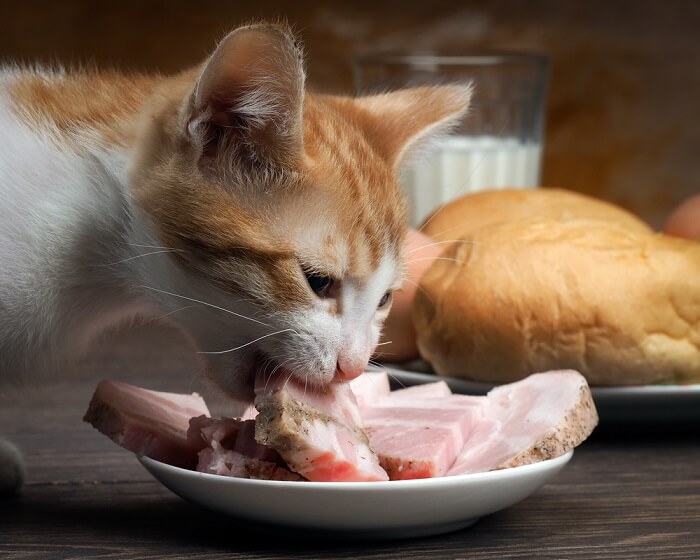 Never serve your cat a large plate of ham. Instead, cut up and offer a few tiny pieces with visible fat removed.

Any ham you give your cat must be plain, without additional seasoning, and on its own rather than part of a dish. Extra salt will only add to the already high sodium content, and spicy seasonings could cause irritation.

Other ingredients like garlic and onions can be toxic, so don’t be tempted to offer your cat a bit of your ham salad sandwich. Before giving your cat ham, check the ingredients, and remove any visible fat.

Since any new food could cause your cat to have an upset stomach, it’s best to start by offering a tiny amount. If your cat enjoys the ham and you don’t see any vomiting, diarrhea, or other adverse signs, you can offer a little more next time. Don’t get carried away, though; three or four pieces the size of your fingernail is more than enough.

How Often Can A Cat Eat Ham? 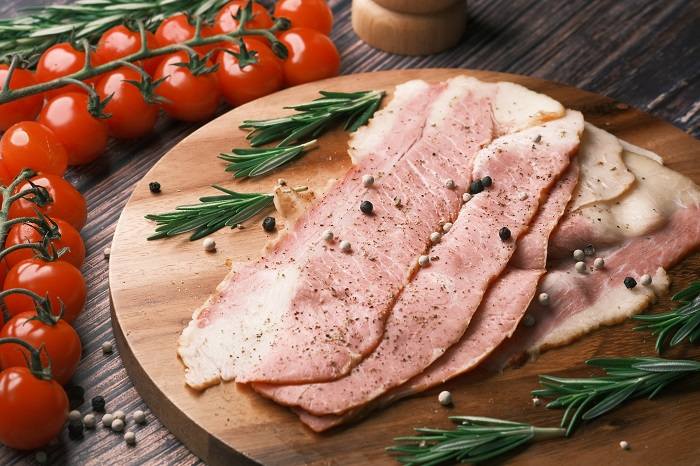 Because of the salt and fat content, ham shouldn’t be a regular treat. Instead, it should only be given occasionally. That being said, a small amount given once a week or a couple of times a month will do no harm, and your cat might enjoy it.

If you rely on ham to give your cat medication, make sure you give the smallest amount possible. Once the medication course is finished, you could avoid ham for a while in favor of some healthier treats. 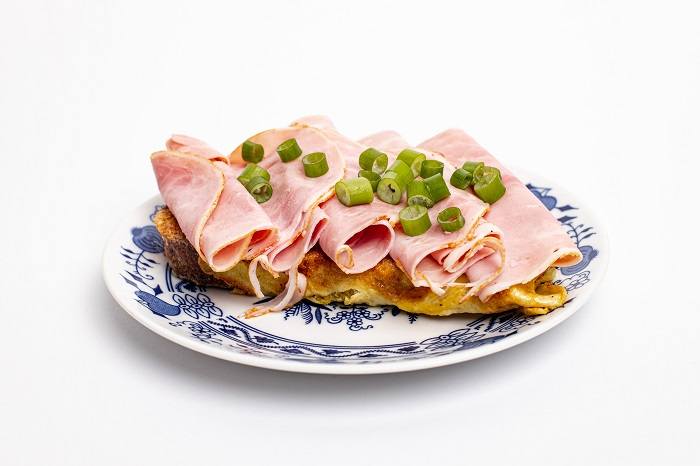 Commercial cat foods are specifically formulated to provide the balance of nutrients your cat needs, so protein sources with less fat and lower sodium are favored.

The Risks Of Eating Ham For Cats 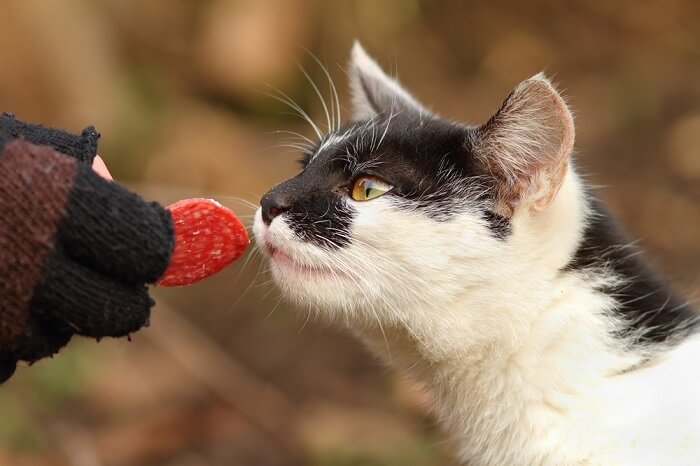 Do not feed other ham products like salami or pepperoni. These contain too much fat and salt, and the spices might also upset your cat’s stomach.

There are several different risks when it comes to feeding your cat ham. First, fatty foods can be associated with pancreatitis. This very painful condition might cause your cat to vomit and go off their food. This is why it’s so important to remove any fat before offering ham to your cat.

Similarly, any bones should be removed because they could cause damage to your cat’s gut or even cause a blockage. If the ham has been cooked with garlic, onions, or other toxic ingredients, this could make your cat unwell, and seasonings and cooking fats could also cause an upset stomach. 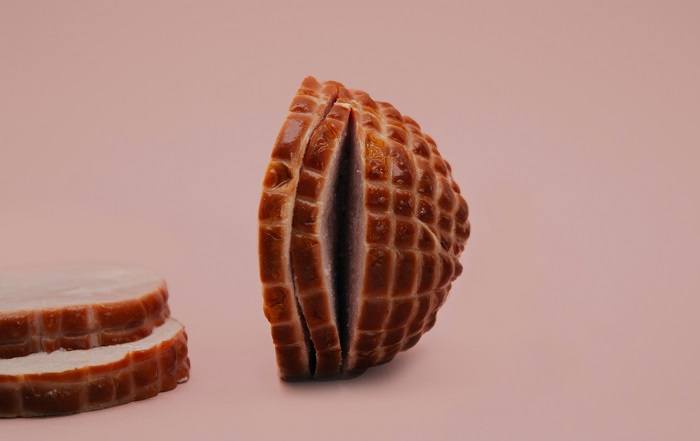 Cats are obligate carnivores, which means that they need animal protein as the primary component of their diet. Although ham is a source of animal protein, leaner options like chicken, turkey, or fish are healthier options for your four-legged friend. So, if your cat does enjoy ham as a treat, make sure you’re not giving it too often.

Is ham toxic to cats?

Ham isn’t toxic to cats, so a small amount won’t do any harm. However, even though it’s a good source of animal protein, it’s also high in sodium and sometimes fat, so it shouldn’t be given too often or in large amounts.

If you do decide to give your cat some ham as a treat, choose plain cooked ham that isn’t coated in honey and avoid giving ham that’s been cooked with other ingredients because these could be toxic.