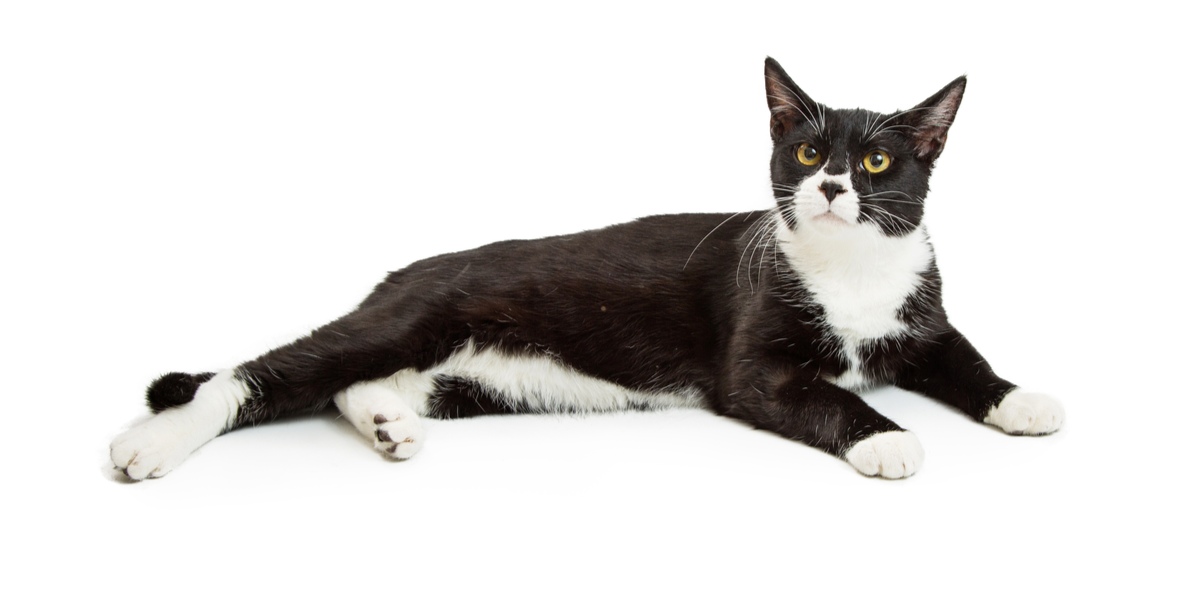 While black is the most common coat color for cats, our black and white friends aren’t hard to find. Bicolored cats appear in several cat breeds, and it’s also a common color combination for domestic mixed breeds.

You can’t identify a cat’s breed based solely on a black and white coat pattern, but those contrasting colors can tell you interesting information about the cat’s genetic makeup. If you look closely at different cats with black and white fur, you’ll see there are distinct differences in how the two colors present and where the patches are located on the body.

There are multiple different types of black and white cats, and we’re here to help identify those contrasting coat patterns

All black and white cats are considered bicolor, or piebald, cats. This classification encompasses all cats with one primary color coupled with any amount of white fur. The primary colors could be gray, cream, brown, and, most popularly, black. The term piebald can also refer to other animals including horses, birds, pigs, and even snakes.

Like all cat coat patterns, the black and white bicolor patterns are controlled by genetics. Bicolor coat patterns are present when the cat inherits at least one allele of the “white spotting gene.” As an incompletely dominant gene, the white spotting gene can present in different ways depending on how many dominant and recessive alleles a cat receives from its parents.

If there are two dominant white spotting alleles, for example, white fur will cover more than half of the cat’s body. One dominant and one recessive gene will likely give the cat more of an equal mix of white and dark fur.

The Cat Fanciers Association grades bicolor cats based on a scale of 1 to 10. A cat on the low end of the scale has no white spotting, and a 10 is completely white.

There is also a pattern related to the white spotting scale and where the white fur is located. In most cases, low-grade patterned cats have a few white markings on their chests or bellies. As the grade increases, the white fur spreads first to the front paws, then to the sides, and finally to the legs and face. Remember, however, this isn’t a set rule.

While you can easily find a bicolored cat at an animal shelter, cat breeders also plan pairings in hopes of having kittens with specific black and white patterns. The Turkish Van, British Shorthair, American Shorthair, Manx, and Turkish Angora are all breeds that include bicolor coat patterns in their breed standards.

There is no way to exactly predict an unborn cat’s coat pattern, and how the bicolor pattern presents will always be affected by different genes. Differentiating between the different black and white coat patterns isn’t always exact, or easy, but here are basic descriptions of the most common markings and patterns. 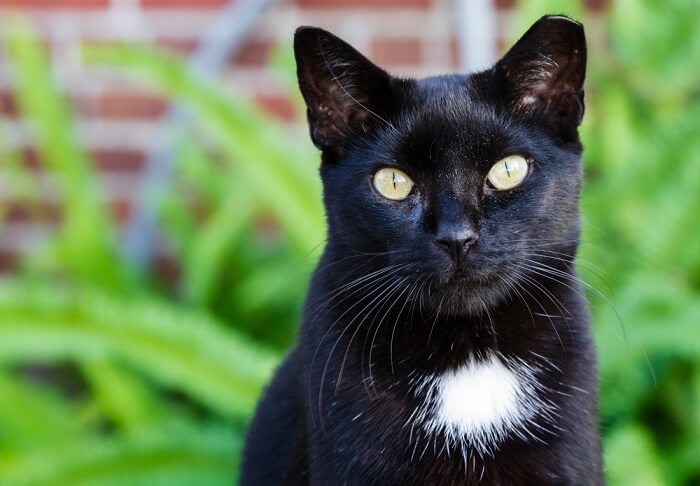 Classified as low grade on the white spotting scale, a locket cat has only a small patch of white fur. These white-colored hairs can be arranged in a patch, spot, or a slim streak and are most often located on the cat’s chest.

This creates the illusion that the cat is wearing a locket necklace. A cat with a small white marking on its stomach may also be considered a locket cat. 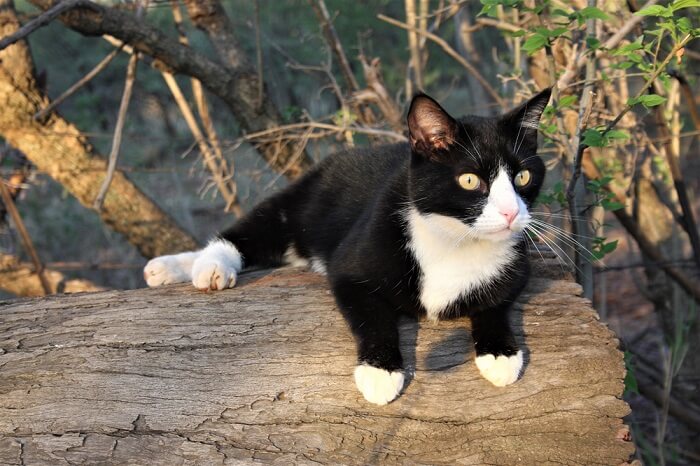 These fancy felines are potentially the most popular when it comes to black and white cats. The white fur on the chest, belly, and paws makes the cat look like it’s wearing its best formal clothing.

Sometimes tuxies also have white on their faces. When identifying a tuxedo cat, remember that formal fashion comes in all colors. A cat doesn’t have to be black and white to be a tuxie. The coat pattern also presents in gray and white cats, and even tabby cats can have the tuxedo pattern. 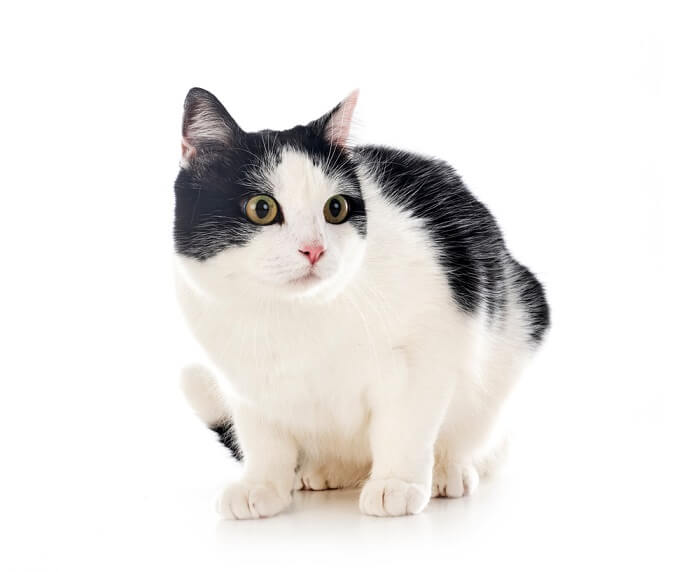 While bicolor is often used as an umbrella term to classify all cats with two coat colors, a “true” bicolor is a cat with equal amounts of both white fur and whatever their other color is. These are the medium-grade cats on the white spotting scale. In most cases, the contrasting fur comes in patches and is equally distributed across the body. 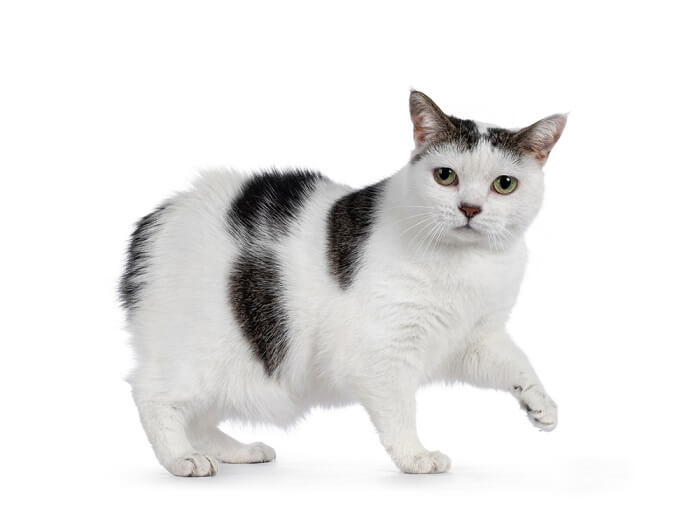 Sometimes called a cow cat, or even a Dalmatian cat, the harlequin cat coat pattern is identified by smaller, random spots and patches of color over a white coat. The spots can cover most of the body, and there is no discernible pattern. These cats don’t have the uniform stripes or swirls of a tabby or large colored sections of the tuxedo. 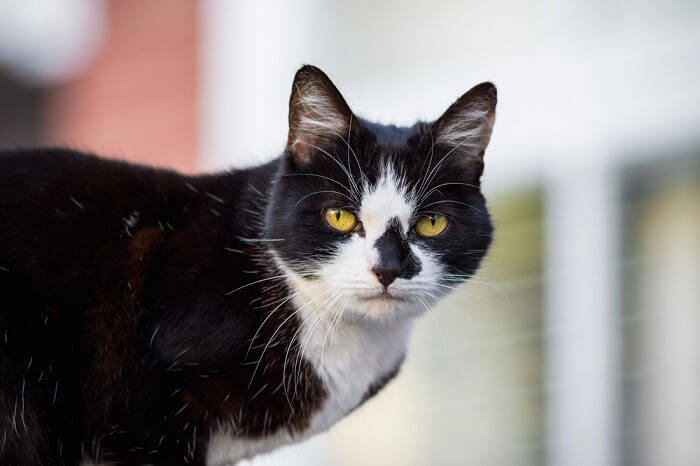 Mask and mantel refers to a specific coat pattern where a cat has dark or colored fur around the eyes, ears, and forehead. The white fur usually starts at the nose and goes down the chin, neck, and chest. This creates the illusion that these cats are dressed for a masquerade ball. Some of these masked kitties also have a mantel, which looks like a colored cape over their shoulders and torso. A cat can have either a mask or a mantel, and some cats have both. 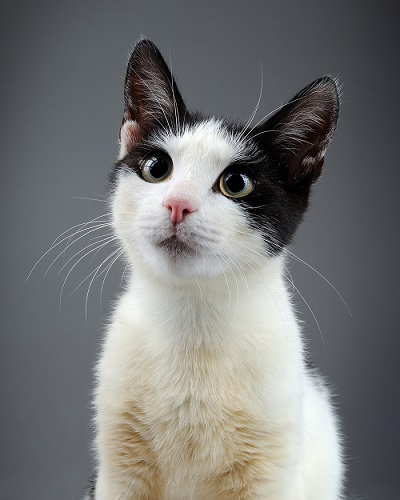 The cap and saddle coat patterns are similar to the mask and mantle. Instead of a full mask, a cat with a cap has a patch of colored fur that starts above the eyes. A saddle is also a smaller version of the mantle. This kind of patch doesn’t cover the cat’s shoulders and is positioned on the back as if the cat is wearing an actual saddle.

Cat coat pattern isn’t exact, and it’s possible to find black and white cats with fur markings that don’t fit exactly into any of the above categories. They’re rare, but they exist. The van coat pattern, for example, is usually only seen in the Turkish Van cat breed or cats with that breed somewhere in their lineage.

These cats are mostly white and have small streaks or patches of black fur on their heads. Their tails are also usually black, but everywhere else is white. There are also “skunk” cats that have a white stripe down their spines.

According to Cat Fanciers Association, black and white cats also get their coat patterns from an illness or health condition. Vitiligo, for example, is a condition that causes a loss of pigmentation usually on the feet and face.

Do you have a black and white cat? Can you determine their specific coat pattern?