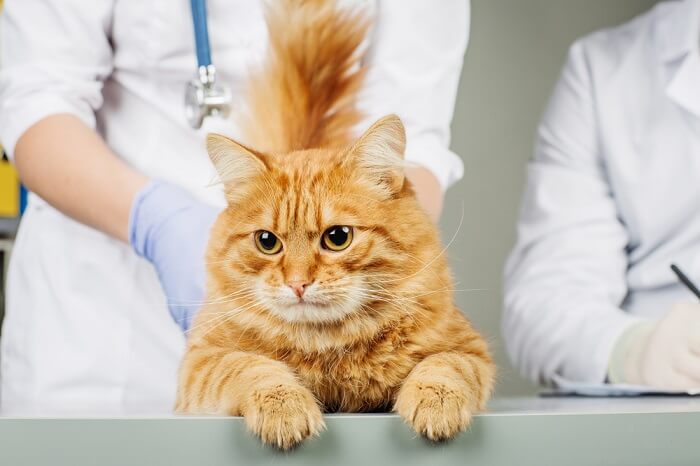 Fluoxetine, also commonly known by the brand name Prozac, is a medication commonly used in veterinary medicine to treat behavioral disorders, including inappropriate urination, in cats.

In this article, you’ll learn how fluoxetine works, situations where it is often prescribed, potential side effects and drug interactions, and some frequently asked questions.

About Fluoxetine For Cats 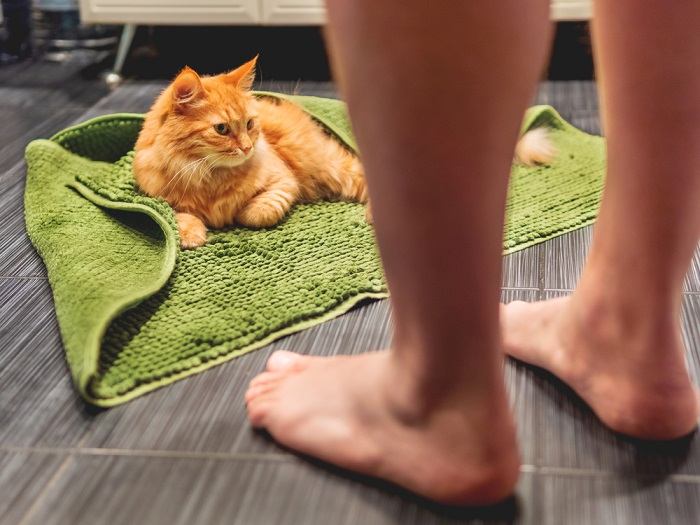 Serotonin is a principal hormone in the body that acts as a neurotransmitter in the brain. It is the main transmitter involved with stabilizing mood, well-being, and happiness.

SSRIs act to increase serotonin levels in the brain by preventing its reuptake or reabsorption, keeping it in circulation.

Fluoxetine is very selective in that it has little effect on other neurotransmitters in the brain, primarily just serotonin.

What Does Fluoxetine Do For Cats? 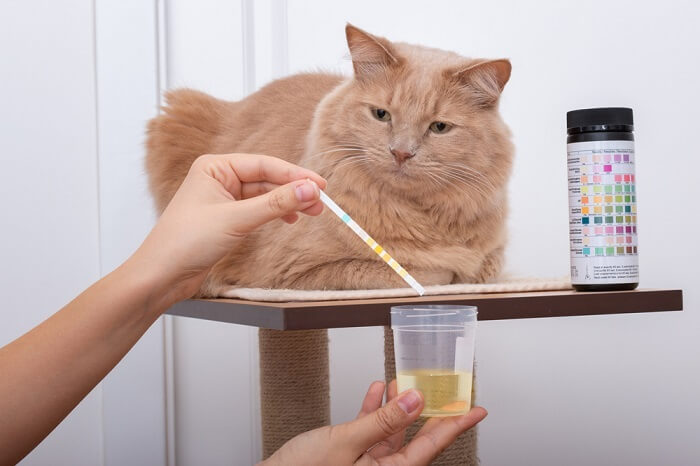 Generally, fluoxetine may be used for a variety of behavioral disorders, including aggression, obsessive-compulsive behaviors, separation anxiety, and inappropriate elimination.

Cats are very complex creatures, as all kitty parents know, and they can exhibit some very odd behaviors interacting with their human counterparts as well as other pets in the home.

It is important to rule out medical causes of unusual behaviors, like underlying pain as a cause of erratic behavior or aggression, or infection, bladder stones, or sterile inflammation as a cause of unwanted urinary behavior.

But generally, if medical causes have been eliminated, and some non-prescription behavioral approaches may have been tried, fluoxetine is often a first choice for many behavioral conditions in cats. This is especially true for cases of inappropriate urination.

Side Effects Of Fluoxetine For Cats 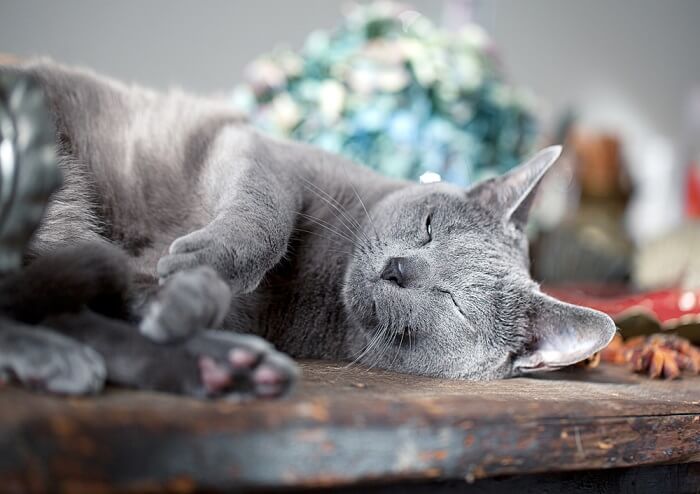 In cats, fluoxetine can have a number of potential adverse effects.

The most commonly reported effects can be drowsiness and a decrease in appetite.

Cats can also develop GI side effects like poor appetite, nausea, vomiting, or diarrhea. All potential side effects are not universal, but vary greatly from cat to cat in terms of what may occur and to what degree.

If your cat uses a flea/tick collar, make sure to discuss this with your vet prior to starting fluoxetine.

Fluoxetine should be used with caution in diabetic patients, as its use with insulin may alter insulin requirements. It may be a common recommendation after starting fluoxetine in a diabetic cat, to have blood glucose levels rechecked to see if any adjustments need to be made.

Fluoxetine is primarily metabolized by the liver, and so should be used cautiously in any cat with chronic or advanced liver disease.

Overdoses of fluoxetine can be very concerning. While increasing serotonin in the body can be helpful with some behavioral disorders, increasing it too much can lead to severe side effects including vomiting, excessive drooling, diarrhea, agitation, tremors, and seizures. This is called serotonin syndrome and requires immediate veterinary care if it occurs.

If you are ever concerned that your kitty may have developed side effects while taking fluoxetine, or if you think an overdose or medication interaction may have occurred, make sure to contact your veterinarian, the ASPCA Animal Poison Control Center (1-888-426-4435), or Pet Poison Helpline (1-855-764-7661) for further advice. 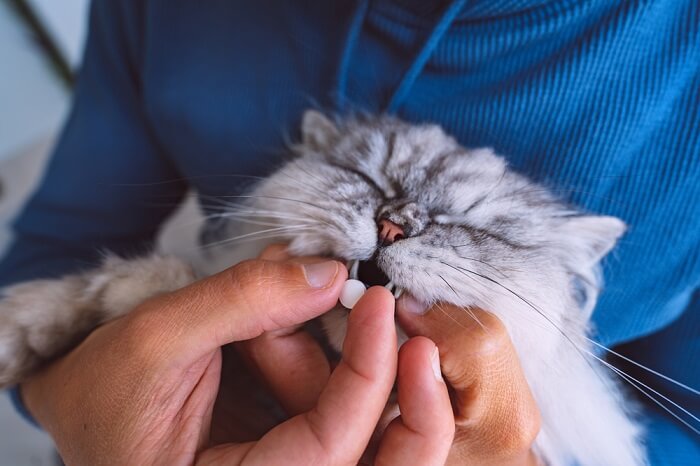 Fluoxetine is generally dosed once daily and when first started should be continued for at least 4 to 8 weeks as long as no concerning side effects are seen.

While fluoxetine is labeled for use in dogs as the brand Reconcile, there is no FDA approved product for cats, so it is used in an extra-label manner in kitties.

Starting doses for cats tend to be low and this medication has a narrow margin of safety, so a dosage for your cat is best determined by your cat’s attending veterinarian.

Doses as low as 15-20mg for an average 10 lb cat have demonstrated signs of toxicity, so under no circumstances should a human dose of Prozac be shared with a cat in the home.

Fluoxetine is generally dosed once daily and when first started should be continued for at least 4 to 8 weeks as long as no concerning side effects are seen, to fully determine if the drug is working to address a behavioral problem.

It is extremely important to not discontinue this medication abruptly. If your cat is exhibiting signs of undesired behavior or side effects, make sure to contact your veterinarian first. If your cat has been on fluoxetine for several weeks and no improvements have been seen, it is very important to contact your vet to discuss, as weaning a kitty slowly off the medication is typical when looking to discontinue it.

It’s helpful to note that because cats require smaller doses of fluoxetine, that having the medication ordered through a compounding pharmacy, sometimes in a small treat or liquid form, is common. It’s important to be aware that the transdermal (skin application) form has been found in studies to be much less effective however for proper dosing. 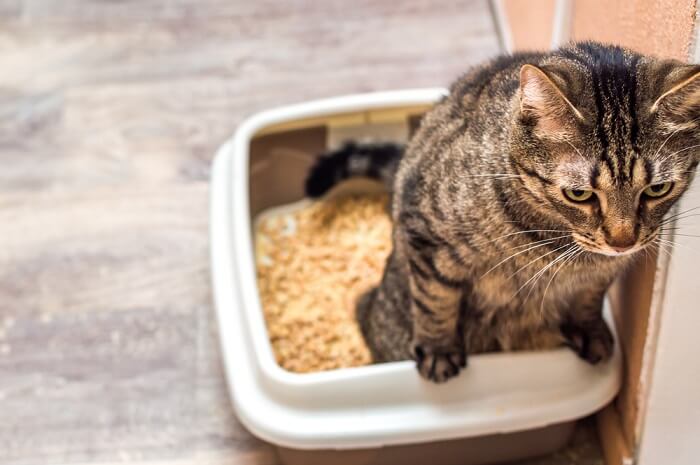 Fluoxetine can be a very helpful and effective medication for treating cats for a variety of behavioral disorders, including inappropriate urination. But because side effects and drug interactions can occur, and because overdoses can be concerning, it’s very important for fluoxetine to only be used for cats when appropriately prescribed by an attending veterinarian.

What Does Fluoxetine Do for Cats?

Fluoxetine is a selective serotonin reuptake inhibitor (SSRI). It works by keeping serotonin levels higher in the body, which can help to improve mood and a sense of well-being.

How Long Does It Take for Fluoxetine to Work in Cats?

Drugs like fluoxetine can take a long time to reach their peak level of effectiveness. When starting fluoxetine it is possible to see behavioral improvements in as little as 1-2 weeks, but it is common to continue a cat on it for at least 4-8 weeks to fully assess its effect on a behavioral problem.

Whenever starting a drug like fluoxetine, it is important to be patient and not expect immediate results, but to carefully monitor your cat for slow, steady improvements. If you haven’t seen any improvements in an undesired behavior after 4 weeks, it is appropriate to update your veterinarian.

Make sure to never abruptly discontinue fluoxetine or any other behavioral medication, even if you think it may not be helping. It’s important to contact your vet first to determine the best way to discontinue it or transition to a different medication if desired.

Is Fluoxetine Safe for Cats?

Fluoxetine is safe for use in a majority of cats when prescribed by a veterinarian and dosed appropriately. As with any medication, side effects are always possible. Mild ones seen more commonly may include drowsiness and a decrease in appetite. When discussed with your vet, a simple medication adjustment may help. More concerning side effects or undesired behavioral effects tend to be much less common.

Overdoses or interactions with other medications may lead to serotonin syndrome, which can cause serious signs of illness. This most often occurs with accidental overdoses or if a human dosage equivalent of fluoxetine is given.

If you are ever concerned that your kitty may have developed side effects from use of fluoxetine, or if you think an overdose or medication interaction may have occurred, make sure to contact your veterinarian, the ASPCA Animal Poison Control Center (1-888-426-4435), or Pet Poison Helpline (1-855-764-7661) for further advice.

How Long Can a Cat Stay on Prozac?

A cat can stay on fluoxetine for life if needed. However, any behavioral medication should be given in light of both its continued necessity as well as other behavioral modification approaches.

If a stressor in the home, such as another pet or housing situation, which was the source of a cat’s undesired behaviors, has been resolved, a cat may no longer require this medication, or the dosage may be adjusted.

While training and behavioral modification is trickier for cats as compared to many dogs, products like Feliway and other approaches like litter box number and strategic placement for inappropriately urinating cats, may reduce the need for medication.

This is why it is always very important to update your veterinarian with any changes in your cat's status or the perceived source of stress, if known.

In many cases, a cat’s stressor may not be clear, but if it’s evident that a kitty is calmer and not exhibiting undesired behaviors while on fluoxetine, it is best to continue the medication as long as needed while the condition is being acceptably managed and no concerning side effects are being seen.

4 thoughts on “Fluoxetine For Cats: Overview, Dosage & Side Effects”