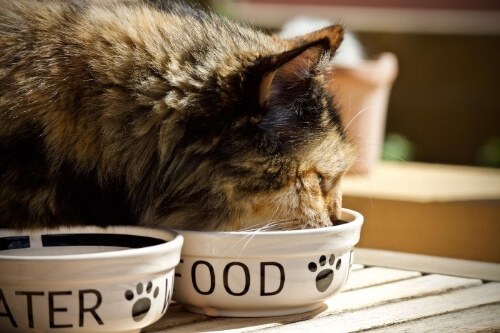 For vegans and others with misgivings about the livestock industry, caring for a carnivorous animal comes with a serious moral dilemma. Some say vegan cat food is an ethical solution. But is it fair to feed a carnivore a plant-based diet?

Instead of defaulting to the tired argument that vegan cat food is abusive, I was determined to give a better answer. I wanted to know the truth about vegan cat food.

In order to answer the questions vegan cat guardians are asking, I tried to understand the way they think. I watched What the Health, spent hours reading comment threads on vegan sites, spoke on the phone with a representative of Evolution vegan pet food, exchanged emails with ethical vegans who have cats, and studied the body of research on vegan and vegetarian pet food.

Here’s What I Learned. 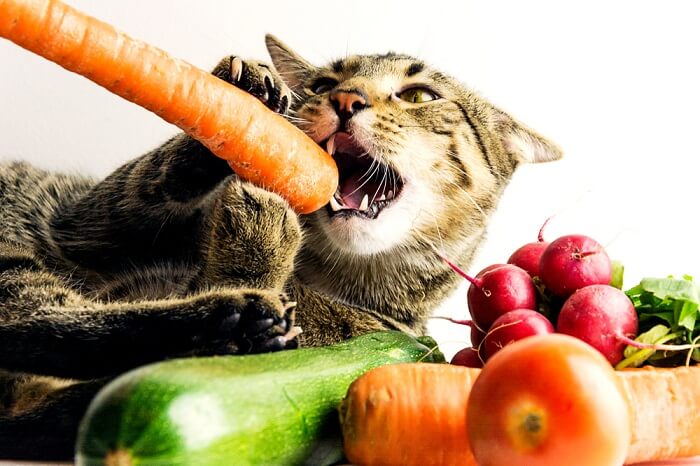 Over 70 billion land animals are killed for food every year—over nine animals for every human on the planet. That number doesn’t include the billions of fish harvested from the globe’s oceans and farms. In the United States, dogs and cats account for about 25% of America’s animal production, contributing to the country’s use of land, fuel, and water, all the while driving up carbon dioxide emissions.

For some cat guardians, this means a moral dilemma comes mixed into every meal of traditional meat-based cat food. Cats are natural carnivores, but being a domesticated carnivore means contributing to mass industrial slaughter. Yet taking away a carnivore’s ability to eat meat is also oppressive.

Can Cats Be Vegan or Vegetarian? 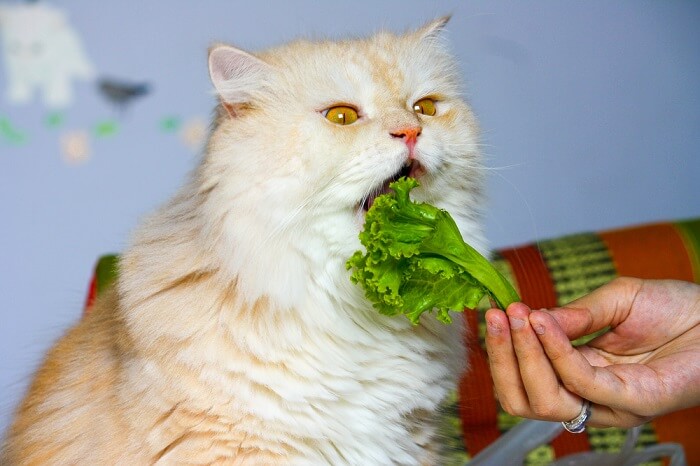 Until the first cat decides to reject his carnivorous nature, no. Cats can’t be vegan.

And while cats can and do appear to thrive on properly supplemented plant-based diets, that doesn’t change the fact that cats are carnivores.

Evidence of the feline need for meat is apparent in almost every aspect of their physiology.

Cats’ Jaws Are Optimized For Meat And Bones, Not Plants. 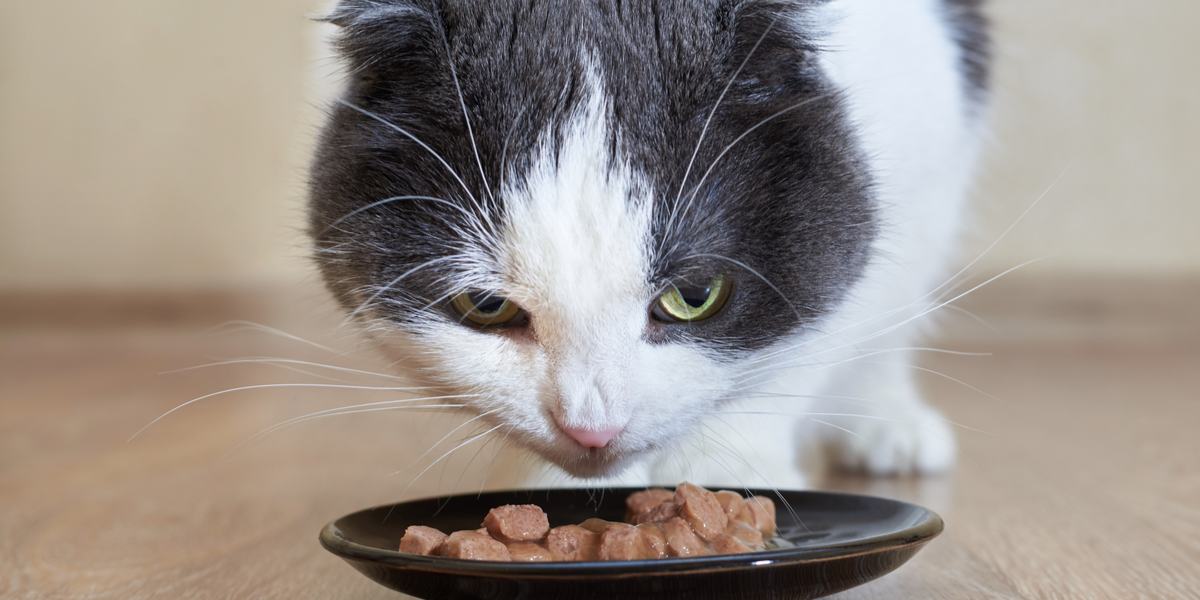 Instead of moving their jaws up, down, and side to side, cats are only capable of up-and-down jaw motion. Their powerful jaws and jagged teeth are excellent at ripping meat and crunching bones, but they’re no match for foods meant to be chewed.

Additionally, cats don’t produce salivary amylase, a digestive enzyme secreted in the saliva and used to break down starches.

Compared To Non-carnivores, Cats Have A Low Body-To-Digestive Tract Ratio.

Because vegetation is difficult to digest, plant-eating animals have complex, fermentation-driven digestive processes. In contrast, carnivores have short, simple digestive systems. Food moves rapidly through a carnivore’s GI tract and, because of its low fiber content, undergoes minimal fermentation. 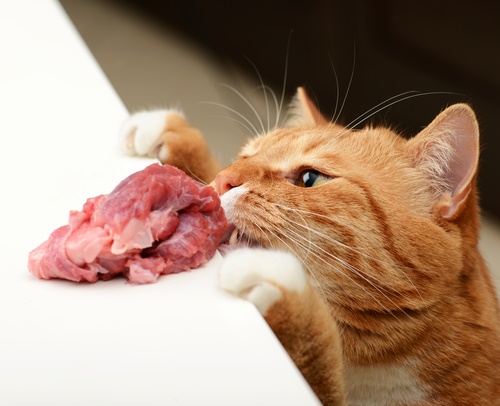 Compared to non-carnivorous animals, cats have a high requirement for protein. As any vegan knows well, meat is far from the only source of protein. But remember that not all protein is the same. Protein is made up of amino acids, all of which have unique characteristics and are metabolized in a different way.

Cats require a variety of amino acids, including the sulfonic acid taurine. Unlike dogs and people, who can synthesize taurine from the plant-sourced amino acid cysteine, cats need preformed taurine. In nature, taurine is found in raw meat, especially raw organs.

Because some taurine is destroyed during cooking, meat-based cat foods are supplemented with taurine, but plant-based foods rely entirely on synthetic versions of the amino acid. 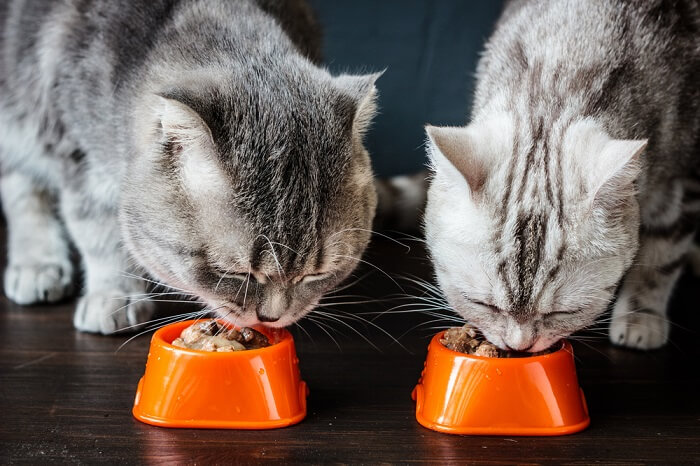 Both plants and animals contain omega-3 fatty acids, a group of fats with the ability to reduce triglycerides, improve joint health, reduce inflammation, and aid brain and eye development.

Though both plants and animals contain omega-3s, plants primarily contain ALA (alpha-linolenic acid), which cats can’t utilize. Sources of ALA include flaxseeds, soybean oil, chia seeds, and tofu. Because their bodies lack the metabolic pathways to convert ALA to EPA and DHA, cats need them in their preformed state. Preformed EPA and DHA are present in salmon, seabass, krill, and other sea animals—plus some varieties of algae. 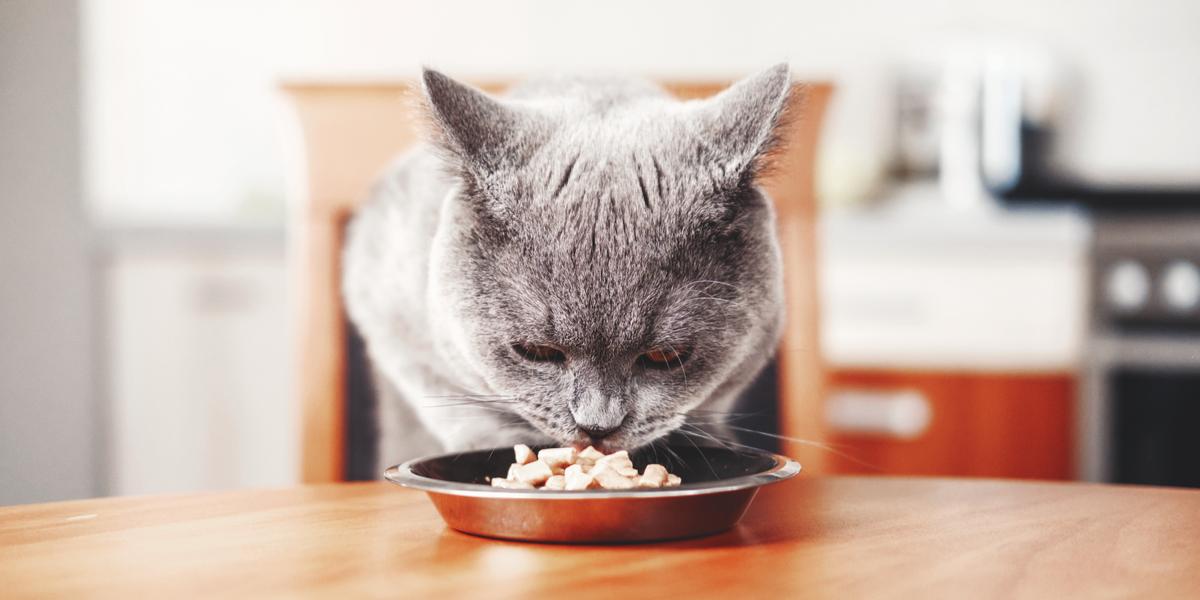 Feline Metabolism Is Optimized For Gluconeogenesis. 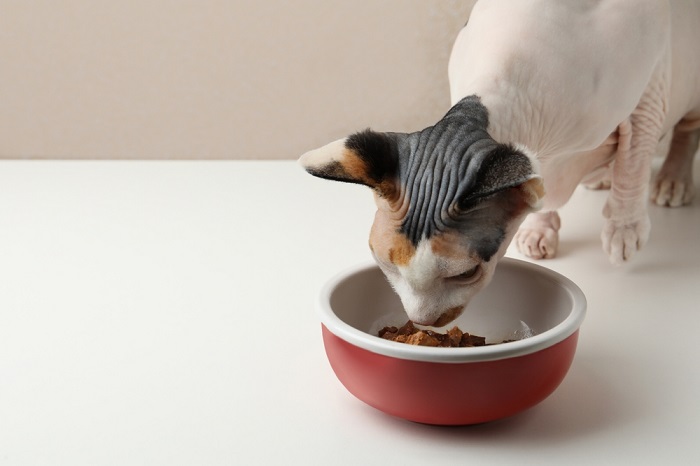 Though cats can metabolize carbohydrates, they have certain metabolic limitations as obligate carnivores. Metabolically, a healthy cat is a little bit like a person with diabetes. Cats lack the hepatic glucokinase pathway, which would result in diabetes in a non-carnivorous animal. Healthy cats also show some insulin resistance, a risk factor for diabetes in non-carnivorous animals.

Instead of using carbohydrates, cats primarily synthesize glucose from protein via hepatic gluconeogenesis. If their high protein requirements—approximately two to three times higher than those of a typical dog—aren’t satisfied, cats will utilize the amino acids in their own muscle.

To prevent muscle wasting and overall decline, cats require at least 2.3 grams of protein per pound of body weight. While they can get this protein from plant sources, those plant sources won’t provide the amino acid profile cats need. 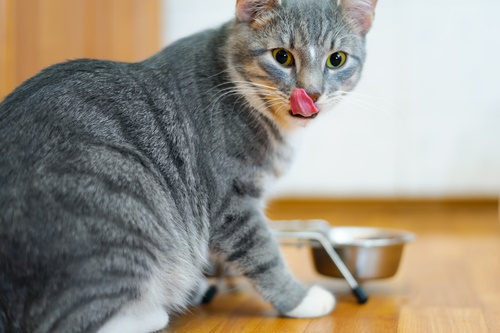 Having learned all this about feline dietary needs, it’s clear that vegan cat food isn’t natural. But is it safe? Let’s review the research.

A study in 2015 found that of 24 canned and dry vegetarian foods for dogs and cats, 25% failed to meet AAFCO minimum nutrient requirements for pet food. When asked if they could provide evidence verifying the nutritional adequacy of their products, five out of twelve companies failed to respond.

Those who did gave varied responses. Though all respondents said that their foods’ nutritional completeness was verified by independent testing, none of them provided details or the results of that independent lab testing. 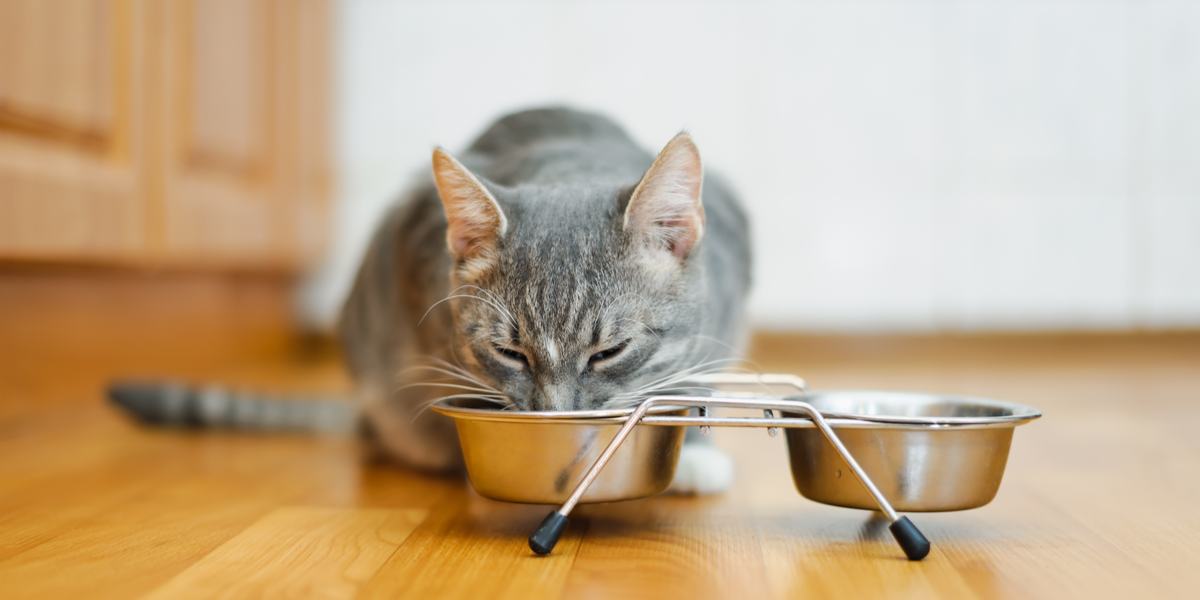 In one study, a group of fifteen cats ate vegan diets for periods of time ranging from six months to over six years. According to blood testing and clinical examinations, almost all of them seemed healthy, happy, and vibrant, though a few were frightened or aggressive. That’s to be expected—some cats just don’t like going to the vet.

Blood test results were normal in most areas, but the cats had significantly lower folic acid values compared to cats eating a carnivorous diet. None of them had below-normal levels of protein, iron, or vitamin B12.

Another study conducted in 2006 followed the health of 34 vegetarian-fed cats for at least one year. The researchers measured 17 of the vegetarian cats’ blood taurine and vitamin B12 levels, finding that most of the cats had normal levels of both. The three cats with abnormal levels had been partially maintained on table scraps in addition to their plant-based diet.

Compared to meat, plants are alkaline. This contributes to an overly high urinary tract pH. An alkaline environment is friendly to bacteria, increasing your cat’s chance of developing urinary tract infections. An alkaline urinary pH also lends itself well to the development of struvite crystals.

Even if it does appear to be nutritionally complete and balanced, feeding your cat vegan food demands great faith in the human ability to parse nutrition.

The further that you get from a cat’s natural diet, the more you have to rely on human intelligence to make the food nutritionally complete and balanced. A diet of shrews, mice, birds, lizards, and bugs requires virtually zero nutritional supplementation. Homemade raw diets need a little boost from synthetic additives. Most cooked foods demands a moderate amount. Vegan cat food gets its nutritional adequacy almost completely from human-made additives.

Vegan cat food is so far removed from a species-appropriate carnivore’s diet that it’s akin to you living off of lettuce sprinkled with synthetic vitamins, minerals, and amino acids.

Dr. Jennifer Coates, a veterinarian who serves on the Pet Life Today advisory board, says  “While it may be possible for a veterinary nutritionist to design a “vegan” recipe for cats that wouldn’t lead to disease, it would have to contain large amounts of nutritional supplements, some of which would probably have animal origins, raising the question of whether that diet would truly be vegan. Even more importantly, the goal in feeding pets is not simply to avoid diet-related illness but to promote optimal health and wellbeing. I sincerely doubt this is possible with vegan cat food.”

Even if you believe that people are capable of replicating the nuances of natural food, the current selection of vegan food is wildly varied and hard to evaluate. Every vegan diet is slightly different—some don’t contain essential nutrients—and there’s limited research on each of these products.

A Plant-Based Diet Vs A Diet Of Meat, Organs, And Bones?

If your cat were let loose into a field of corn, soy, and carrots, would he rush out and start digging carrots out of the earth and using his powerful jaws to shave corn kernels off the cob? Now imagine if that field were filled with mice, voles, and birds. Do you think your cat might show a little more interest?

In an article published on the Food Revolution Network blog, Ocean Robbins shares an anecdote about trying to convert his childhood cats, Brownie and Princess, to a plant-based diet. After three days of turning down meals made with chickpeas, zucchini, rice, and toasted yeast, the kitties took things into their own claws and caught a rabbit for breakfast.

Ocean concludes, “We caved. The cats won. And from that day to the end of their 15+ year-long lives, they each got their share of organic, meat-based cat food.”

In Conclusion, You Can Feed Your Cat A Vegan Diet, But At A Cost. 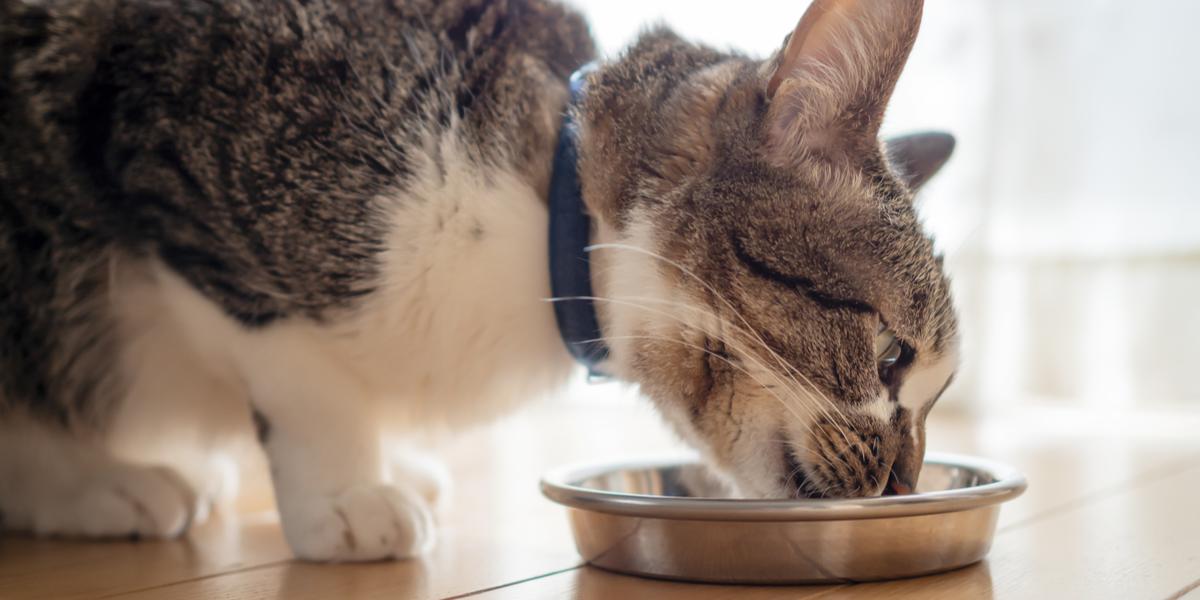 Ocean’s story brings home the point that kept resounding in my head as I researched the world of vegan cat food. Vegan cat food isn’t natural. It’s not normal. Cats will always want to kill and eat other animals. And yet—our cats aren’t natural.

Nothing about their existence is. Domesticated cats live in human homes, get human-created advantages over other animals, and contribute to a human-created system of exploitation. And no, ordinary non-vegan cat food isn’t much more natural than a plant-based diet.

Cats don’t eat beef, chicken, turkey, or tuna in the wild, yet they’re the basis of most cat foods. Just as vegan foods demand a slew of supplements to provide the nutrition cats need, so do cooked cat foods. And most non-vegan dry foods are loaded with corn, wheat, and soy.

If you’re someone who wants to do the best for animals—all animals, including carnivorous pets—then you have to find a compromise.

It’s not perfect, but homemade cat food may be an ethical alternative to both vegan cat food and traditional commercial food. If you do it right, you may be able to make your own cat food without contributing to the meat and dairy industry.

It’s easier to control sourcing and ensure that the meat ingredients are ethically-sourced if you do the sourcing yourself and make your own cat food. Depending on where you stand on the issue of meat consumption, ethical meat sourcing may entail sharing with hunters, salvaging meat that would otherwise go to waste, or perhaps even allowing your cat to hunt on his own.

Of course, this isn’t a complete solution to the vegan cat guardian’s dilemma. During my research, it’s become apparent that the only morally consistent way to solve this problem is to end the institution of cat ownership. But that’s unrealistic. If you have a cat in your house right now, you’ll have to make a choice.

You only have two options. One is to disrespect your cat’s needs and desires by feeding him a diet that’s morally meaningful to you and perhaps other animals, but utterly unnatural to a carnivore. The other is to, if even in an indirect way, kill Peter the Chicken to feed Paul the Cat. 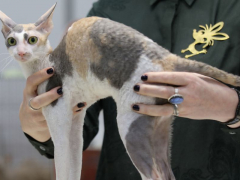 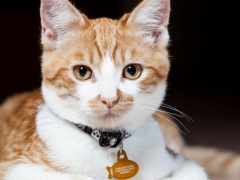 11 thoughts on “Is It Safe To Feed Your Cat A Vegan Diet?”