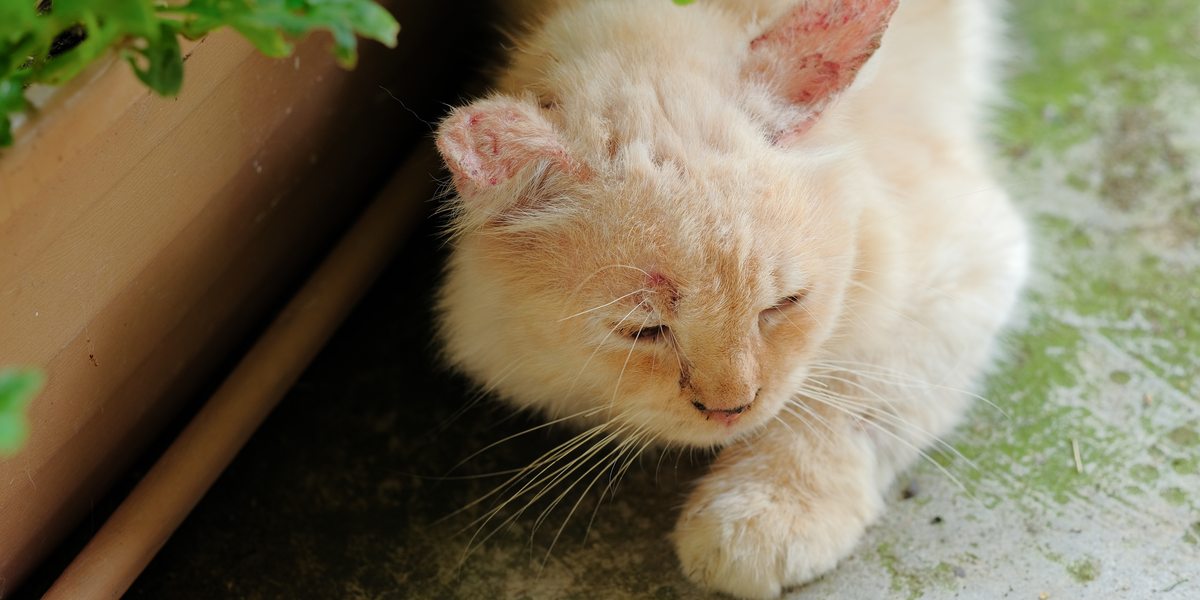 Fungi (or funguses—both are correct!) are a group of organisms that include spores, yeasts, molds, and mushrooms. Like bacteria, they exist all around us, but they are often too small to see. They are found most commonly in soil.

Many types of fungi are harmless, but there are a few that can cause infections in both people and animals. Like other types of infections, cats who are old, sick, or have a poor immune system are more susceptible to developing fungal infections. Cats suffering from an underlying condition such as feline immunodeficiency virus (FIV) or feline leukemia virus (FeLV) are particularly vulnerable.

The most common fungal disease we see in cats is ringworm, which as you might know is not caused by worms, but a fungus called Microsporum canis. Ringworm causes ring-like lesions on your cat’s skin. These lesions are very itchy and contagious to both people and animals.

Ringworm is an example of a fungus that usually only causes localized disease. This means it only affects one area of the body. Systemic fungal infections are infections that spread throughout the body. 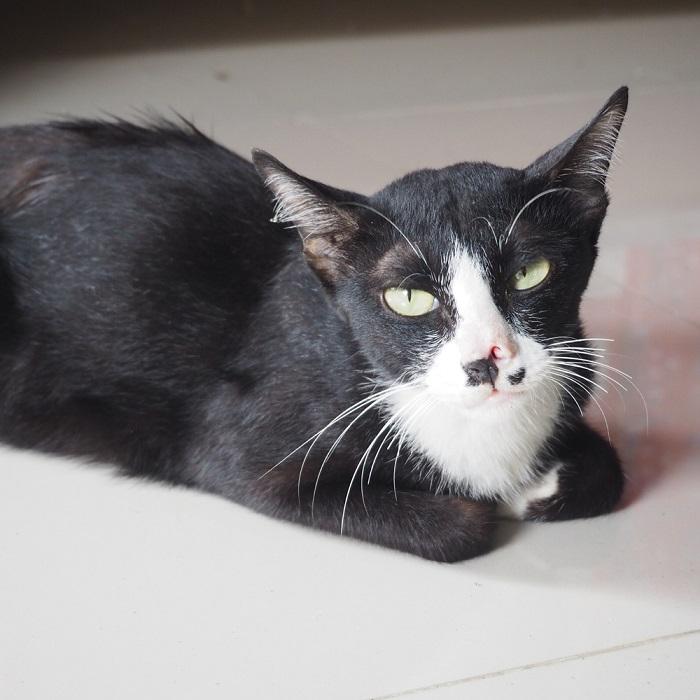 Initially, cyptococcosis infections cause sneezing, swellings or wounds on the nose and face, and difficulty breathing, and nasal polyps.

Cryptococcosis is the most common systemic fungal infection in cats. It is found worldwide, but most commonly across North America (particularly the Pacific coast), as well as parts of Europe and Australia. It is found in soil, as well as bird droppings, especially pigeons. Cats are infected by inhaling the airborne Cryptococcus neoformans spores.

As the spores are inhaled through the nose, infection usually start in the nasal passages. Signs include nasal discharge, sneezing, swellings or wounds on the nose and face, difficulty breathing, and nasal polyps. If the disease spreads from the nasal cavity to the central nervous systems you may notices neurological signs, such as changes in your cat’s behavior, seizures, blindness, circling or depression.

If the infection reaches the bloodstream, it can become systemic, meaning it spreads throughout the body. Symptoms are very varied in systemic cryptococcosis depending on which areas of the body are affected, but anorexia, lethargy, and weight loss are common.

Cryptococcosis can be diagnosed from a tissue sample. There is also an antigen detection test called a latex agglutination test (LAT), which can diagnose the infection using a blood test, or from urine or spinal fluid samples.

If the disease is detected early the prognosis can be good, particularly in cats with just skin or nasal signs. However, treatment is usually prolonged, with months of anti-fungal drugs, and in some cases surgery to remove skin lesions. Prognosis is poor in cats suffering from neurological symptoms or those that have underlying immunosuppressive conditions, such as FIV or FeLV. 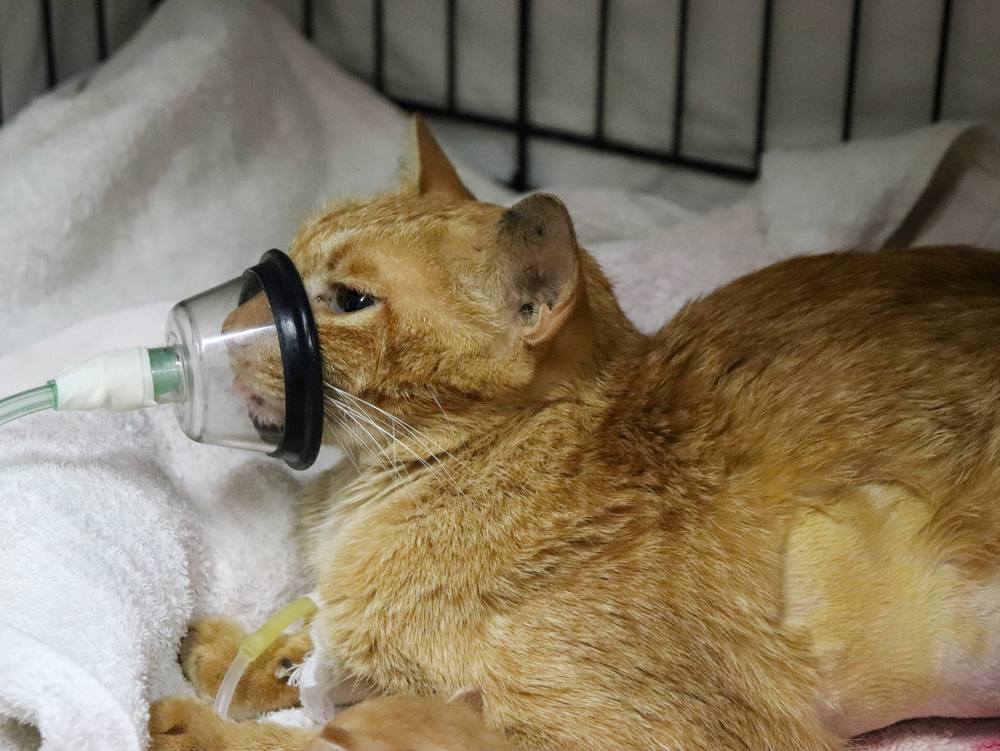 Early symptoms of histoplasmosis include difficulty breathing, coughing, and fever.

Histoplasma capsulatum fungus is also found in soil, as well as in bird and bat droppings. It is particularly common in river valleys in the Midwest and southern United States, but is found worldwide.

Cats may inhale or swallow the fungal spores, leading to infection in either the respiratory tract or the gastrointestinal tract. However, from there the infection may spread around the body in the bloodstream, particularly to the central nervous system and the bone marrow.

Respiratory signs, such as difficulty breathing, coughing, and fever are common. But if the infection has spread to other regions of the body the clinical signs can be very varied. Weight loss, anemia, diarrhea, and depression are common, as well as neurological signs.

Histoplasmosis is usually diagnosed from identification of the fungal organisms in fluid or tissue samples. Cats suffering from systemic histoplasmosis usually require months of antifungal medications. They may also need supportive care, such as special nutrition, fluid therapy, and antibiotics to fight secondary bacterial infections. 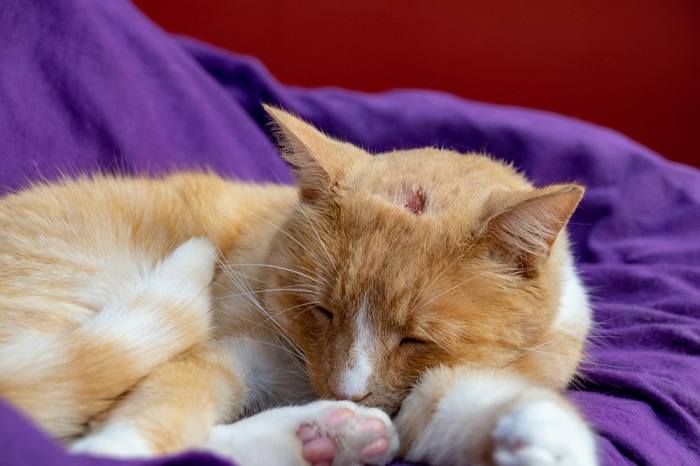 Signs of aspergillosis include nasal discharge, swelling of the sinuses, and changes in breathing.

Aspergillosis is a fungal infection that primarily affects the respiratory tract, but in rare cases can become systemic. It is found worldwide. Aspergillosis is seen much more commonly in cats with poor immune systems, such as old cats or those suffering from other health conditions, particularly FIV or FeLV.

Signs include nasal discharge, swelling of the sinuses, and changes in breathing. In rare cases the infection can also spread to the central nervous system causing neurological symptoms.

Diagnosis of aspergillus can be tricky, often requiring imaging such as x-rays or CT scans, as well as testing of tissue and fluid samples.

Treatment of aspergillosis in cats usually combines surgical and anti-fungal treatments. Prognosis depends on the extent of the disease and the overall health of the cat. 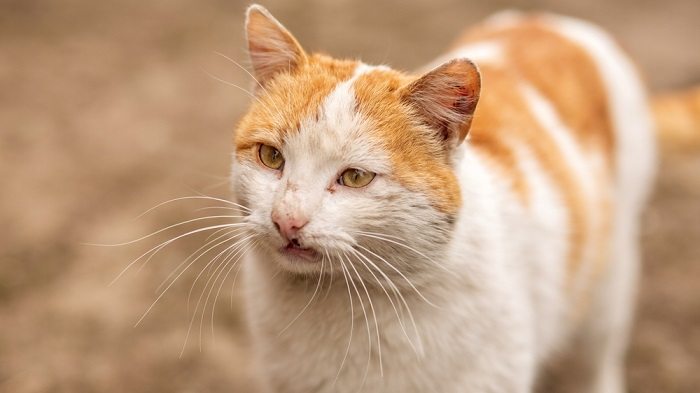 Coccidiomycosis (also known as valley fever) is spread in dust. It is usually only seen in desert-like regions such as areas of South America, Mexico, and the Southwestern United States. Cats are infected by inhaling the spores carried on the specks of dust. Outbreaks of the infection are sometimes seen after dust storms, but it is generally uncommon.

If your cat is infected with coccidiomycosis you may see nodules or skin wounds, fever, coughing, and weight loss. If the infection spreads throughout the body it can cause a wide range of symptoms, including neurological signs and lameness. Coccidiomycosis is diagnosed on identification of the fungus in tissue or fluid samples, or using an antibody test.

The treatment involves long courses of antifungal medications (usually at least a year), and prognosis can be poor except in cats with skin signs only.

If you live in a high-risk area for coccidiomycosis, try to decrease your cat’s exposure to dust and soil as much as possible, particularly during dust storms.

How do you treat fungal infections in cats?

As well as antifungal medications, very unwell cats may need additional supportive care, such as special nutrition, fluid therapy, and other medications such as antibiotics to treat secondary bacterial infections.

Can a fungal infection go systemic?

Most infections begin by infecting one area of the body, such as the skin (as in the case of the skin infection ringworm) or the nasal cavity. We call this a local infection. However, sometimes infections can spread through the body in the bloodstream, affecting more than one part of the body. When this happens, we call it a systemic infection.

What are the symptoms of a systemic fungal infection?

As many fungal infections first enter the body inhaled through the nose, symptoms affecting the respiratory tract (such as nasal discharge, difficulties breathing, and swellings on the bridge of the nose) are common. From here, some fungi spread to the brain and central nervous system causing neurological signs (these can include blindness, seizures, depression, and circling).

However, fungal infections can spread to almost any area of the body, and so the range of possible symptoms is very wide.

What does a fungal infection on a cat look like?

There are many types of fungal infections in cats, and they can affect different areas of the body. As a result, the symptoms are very varied.

The most common fungal infection in cats is ringworm, which causes ring-shaped itchy lesions on their skin. Other types of fungal infections can also cause nasty skin lesions such as abscesses, swellings, and non-healing open wounds.

Many of the fungi which can cause systemic infections enter the body by being inhaled through the nose. Therefore, you might see discharge from the nose or swelling around the nose and face.

In general, fungal infections look very different depending on what part of your cat’s body is affected. If you are worried your cat may have a fungal infection, it is important to take them to see your veterinarian.